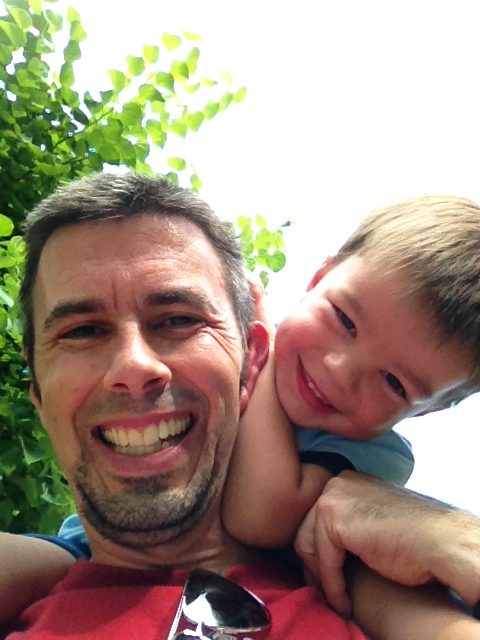 If you have been doing this for very long, you know there are pivotal moments that create parenting wisdom. These can be mistakes you make that you vow never to make again, ah-ha moments where something just clicks or maybe advice someone gives you. Subtle paradigm shifts that change the course of our parenting style.

We all have those places that ideas come to us consistently. Maybe in the shower or while you’re out for a run. I love those moments! I can’t begin to tell you how many of those have happened to me while dating my kids over the years. When you start something from nothing and grow it organically, like my decision to commit to one-on-one time with my kids years ago, you are going to have certain moments along the way that you reflect back on. I attribute so much of my parenting wisdom to that special time with them, and that is no doubt the reason I feel so close to them.

An intro to the story –

One moment that comes to mind was a pivotal moment in parenting that happened at the top of our stairs as Truett, and I got ready to leave for our 12th date a few years ago.

Let me set the scene up for you.

Truett is two. At the time we had had monthly dates for a year. Eli, who was seven at the time, was going out that evening with my wife Betsy for their monthly date as well. They were leaving just a couple of minutes before us. As they walk out the door, Eli happens to tell Truett that I would be putting him to bed that night because they would be getting home late.

Let me tell you about my Truett, my (now) middle child. He is fierce on the soccer field, passionate about Ninja warrior. He is strong, doesn’t mind bleeding, is the child other kids want to hang out with. Truett loves his brother and sister. His kryptonite, vegetables and anyone putting him to bed beside his mom. Truett loves his siblings and me during the daylight hours, but when darkness falls, his loyalty is to one, my wife. 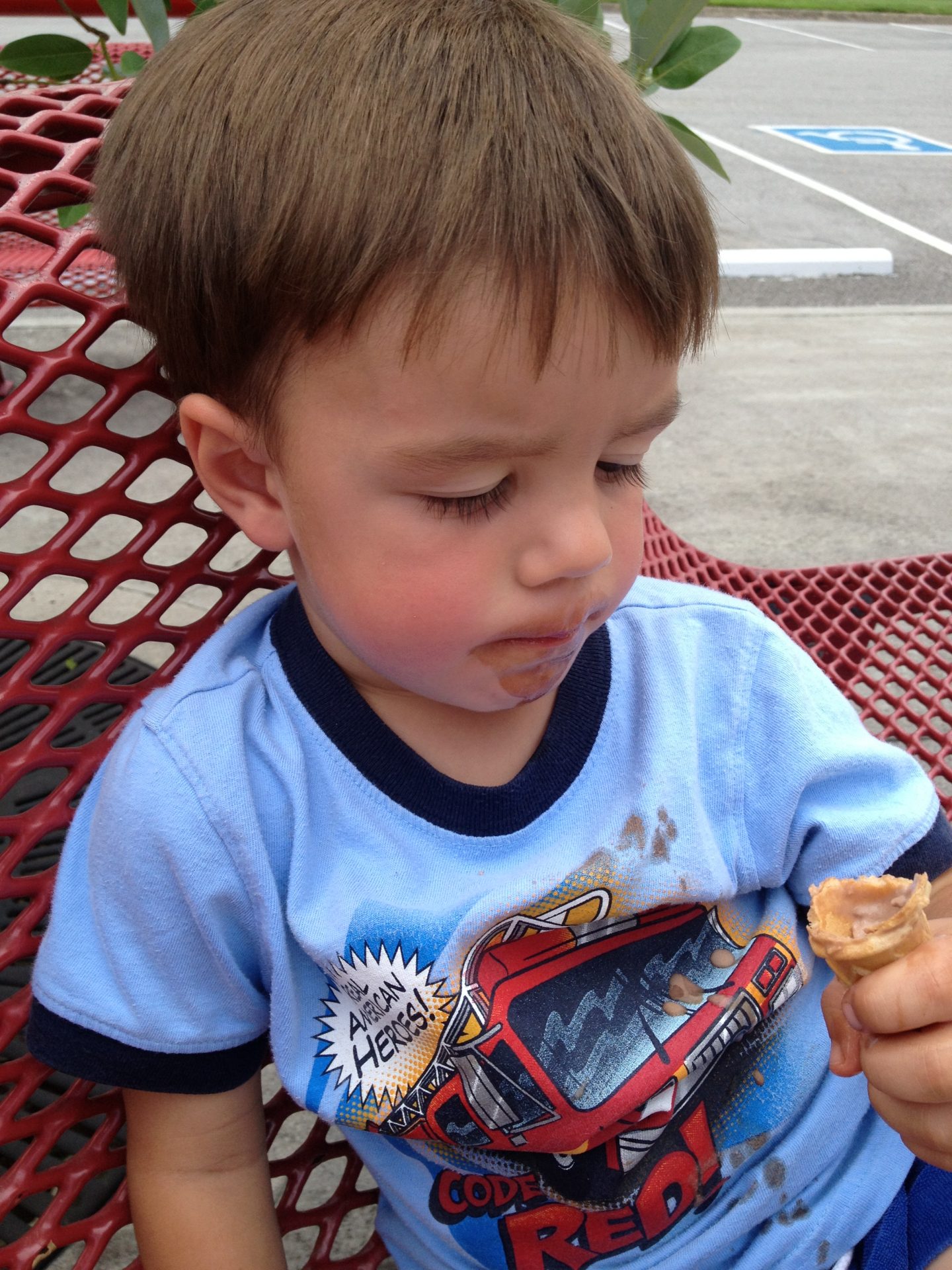 I just want to quit…

There were golden moments in the previous year’s dates I had had with Truett. But some things made it difficult to have monthly dates with him at such a young age. (For my thoughts on when to begin dating your children, read When To Begin A Date Night With Kids.) One was the mood swings in general that come with a two-year-old. The other was him wanting to repeat the same few dates over and over.

There were times where I had to stop and ask myself, are these dates for him (and us) or me? So what if he wants to go to the park and get ice cream every month? The greatest gift I could give him wasn’t the ice cream but that of consistent one on one time together. The creativity in our time would come later.

Back to our steps and Eli’s simple destruction of our date.

They walked out the door, excited about their date (insert eye roll) and I was left with Truett at the top of the steps in a two-year-old fit.

At that moment, I just wanted to go downstairs and check out for the night. Let me assure you, the last thing I wanted was to put him in the car and go out on a date.  But I had learned over the years of dating my children that these moments are simply going to happen. Often the date doesn’t begin well or isn’t going well in general. In those critical times, I try to stop and turn the date around the best I can.

At the top of the steps, I took a deep breath and talked as calmly to him as I possibly could.  In almost a whisper I began to speak to him about our date options for the evening while gently rubbing his leg. To my surprise, it started to work.  Within just a couple of minutes, he was reaching for me to carry him down the steps. 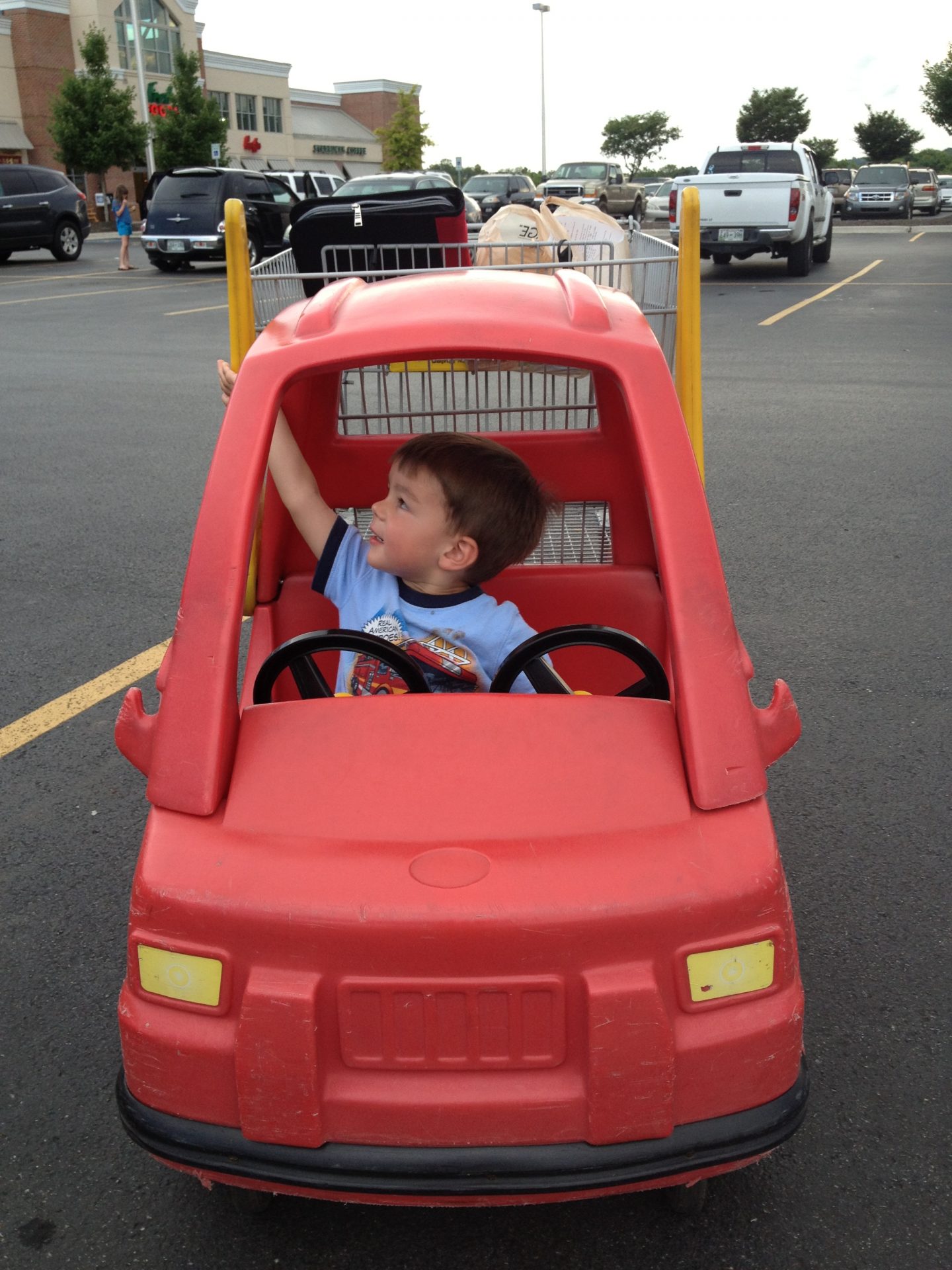 The only thing he requested for our date was to get ice cream; the rest was up to me.  We left our house and went to a great playground, and I swung him for 30 minutes.  As I stood there, I tried to engage him in conversation. I began to ask him questions about his day, but then I caught up with his desire to simply be in the moment.  Some moments don’t require words.  We took the brief walk to our car with him on my shoulders and headed for his main event, ice cream. He finished quickly, and I gladly shared the rest of mine with him.

We left there and headed to the grocery store to pick up some things. Some might think the grocery store as boring, but this one has these fantastic car buggies that the kids can ride in.  I loaded him up, and we headed for our aisle.  He loved riding in that car!  I could have simply gotten the items and left, but I felt as though he could have been in a parade.  He was so proud! I took the time to push him throughout the store.  We left there and came home and played a few minutes of Wii.

One date at a time

I put him to bed (without a fight), and I closed out the final date with my two-year-old.  The next month we would have our 13th date, and he would be three-years-old by then. He will in all likelihood not remember any of our dates our first year but I will. He will, however, expect future dates each month and I know that a foundation is being laid.

If I expect him to want to spend time with me later and confide in me when he has real problems, that bond and relationship need to begin as early as possible.  The dates I’ll have with him when he’s thirteen and an awkward teenager, the hug I will hopefully be there to receive when he has his first child, and all the dates and life in between are built on decisions made at the top of staircases. 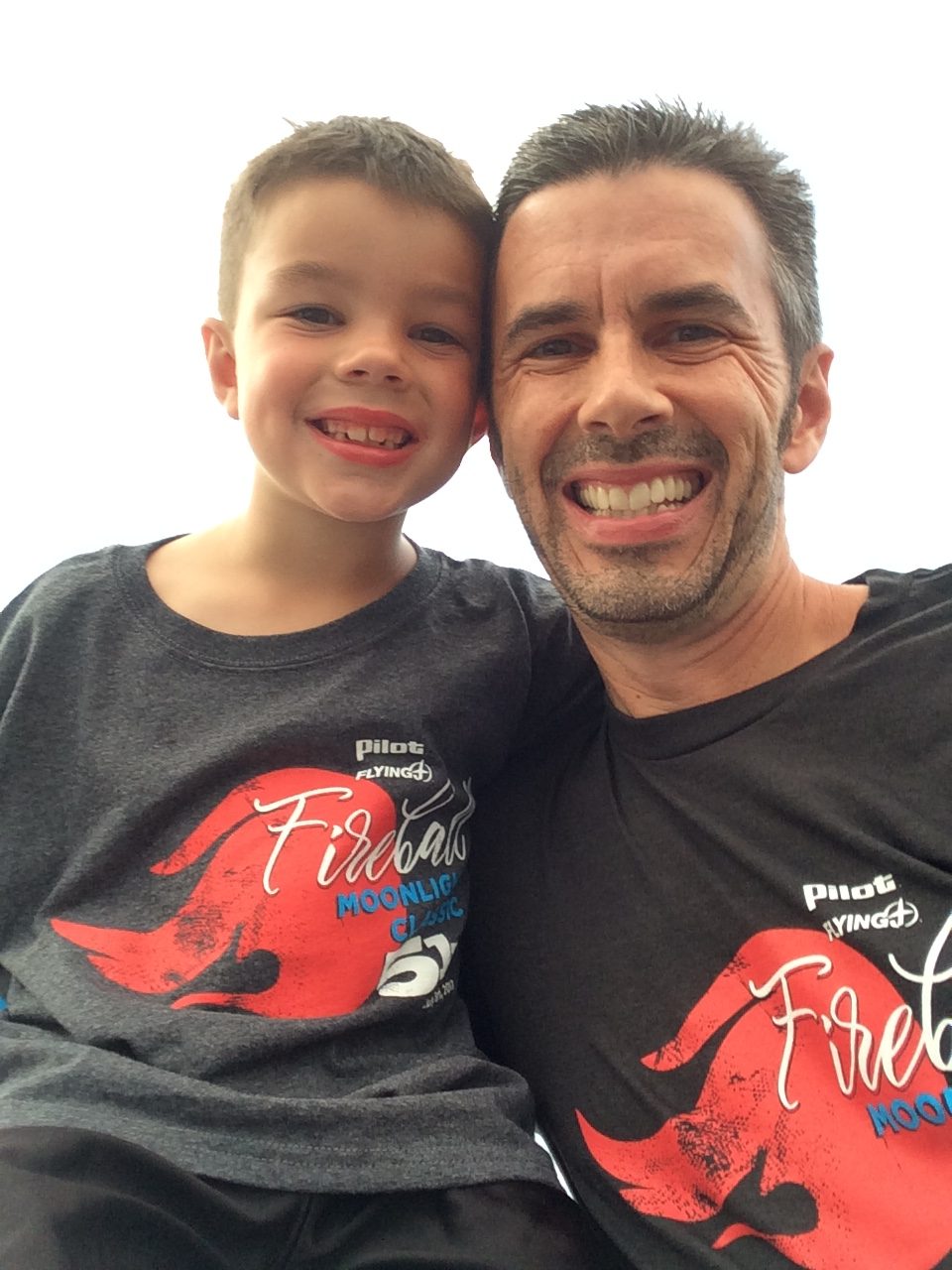 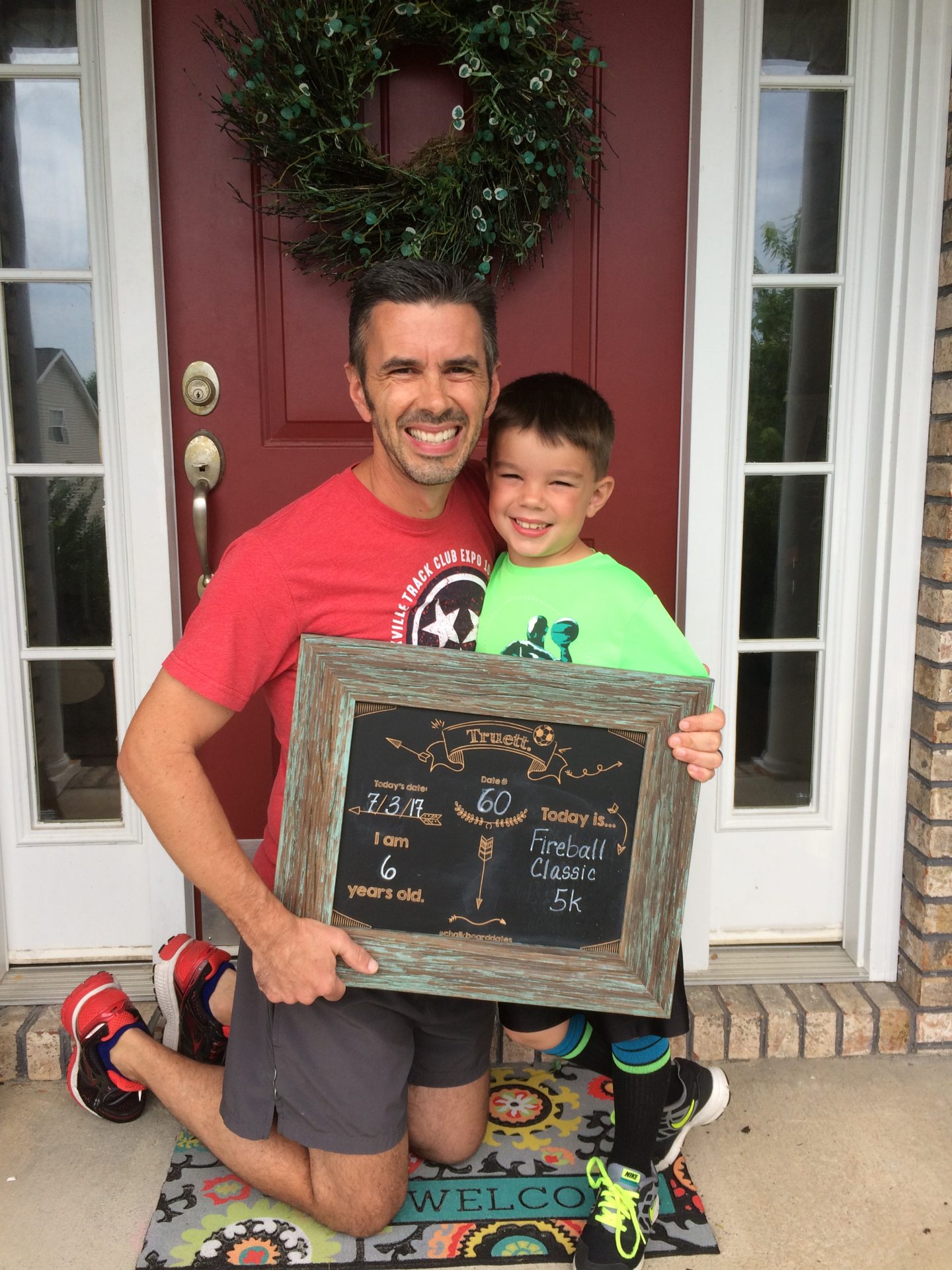 Fast forward a few years… Truett and I recently celebrated our 60th date with our 2nd 5k. Kind of fitting I think, parenting and parenting wisdom is a race, you just have to keep running and never ever quit. I’m glad I didn’t on the top of those stairs years ago.

We’d Love to Connect With You!